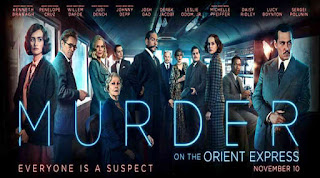 Murder on the Orient Express (1974, 2017)
I hoped there would be a railway chaplain. Before I starting writing this post, I found out there is indeed a railway ministry that puts chaplains on trains, and they’ve been around for 100 years, covering the 1930’s setting of this film. Sadly, there is no chaplain in either version of Murder on the Orient Express that I watched, but both have a missionary -- so I have something to write about for Mystery Month at Movie Churches.

If you don’t know the story of this Agatha Christie classic, you might want to stop reading right here, because the solution to the mystery is rather ingenious, and some of things I write may give away part of that solution. So you might want to stop reading this and pick up one of the many filmed versions to watch (or, you know, read the book). We’re reviewing the more famous 1974 & 2017 versions, but there are others (including a 2015 Japanese telling of the tale). 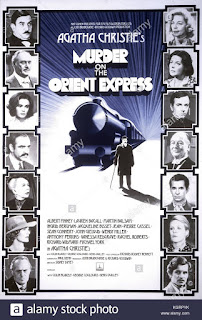 If you’re still with me, let’s start with director Sidney Lumet’s 1974 telling of the story. The film begins with flashbacks from the 1930 kidnapping and murder of the “Armstrong Baby,” Daisy, the child of a famous aviator. (In her novel, published in 1934, Christie was quite transparently retelling the story of the kidnapping and murder of Charles Lindbergh's son.) The film then moves to “the present,” several years later. A number of passengers are seen preparing to board the Orient Express, a luxury passenger train running from Istanbul to Paris. They seem to have very diverse backgrounds, but it becomes clear that all have a connection to that world-famous crime from 1930, and that the kidnapper is one of the passengers. Hercule Poirot (Albert Finney), who modestly describes himself as perhaps the world’s greatest detective, is also on the train.*

At the train station we see a woman searching desperately for her St. Christopher medal. It’s Greta Ohlsson (Ingrid Bergman in an Oscar winning performance), a Swedish missionary. (I wondered about the accuracy of this, thinking only Catholics would have St. Christopher medals. But never wrong Wikipedia says that Lutherans also honor St. Christopher, so go figure.)

Since the film is, after all, a mystery, it’s only a matter of time before someone is murdered. The kidnapper, Ratchet (Richard Widmark), is killed. When Greta hears the news, she says, “God’s laws have been trounced, thou shalt not kill.” A railway executive, a friend of Poirot’s, hires him to solve the murder. He suspects everyone that has a connection to the the Armstrong family. 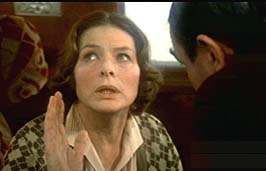 Does that include Greta? She claims to work in Africa as missionary “teaching little brown babies more backward than myself.” She claims to be going to Europe on a fundraising tour.

Poirot uses his “little gray cells” to deduce that Greta was the Armstrongs’ governess, who was bound and gagged during the kidnapping. On the train, she pretends to have limited English language ability. It becomes obvious that she wasn’t a missionary before working for the Armstrongs, before the kidnapping.

Now here’s where the real plot spoiling comes to play. Greta played a part in Ratchett’s murder. She commited the crime “for their Daisy and for mine; God forgive me.”

Kenneth Branagh went in a very different direction casting the nursemaid/missionary character for his 2017 version of Murder on the Orient Express. Penelope Cruz plays Pilar Estravados. This is one of many changes Branagh made with his film, though the basic story is intact.

The film opens with a very different little mystery, Poirot solving a case in the Holy Sepulchre in Jerusalem. An official tells Poirot he has narrowed the suspects to a Rabbi, a Priest, and an Imam. Poirot, of course, solves the crime, and it is not the work of one of the holy men. 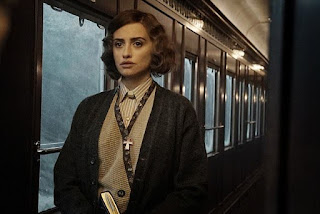 We first encounter Pilar, the missionary, on the train. She is offered wine and replies, “I do not drink.”
When asked if it doesn't agree with her, she replies, “Sin does not agree with me. Vice is where the devil finds his darlings.”

Again, there is the murder of the kidnapper, Ratchett (Johnny Depp). When Pilar is told of the death she says, “God rest his soul.” Again, Poirot must investigate her along with all the other suspects.

Hercule Poirot: You are a missionary but you trained as a nurse.

Pilar: I owed it to God.

HP: You owed Him a debt?

P: There were indulgent times in my life when I took more than I gave.

Later, from HP: Your hands are those of a boxer.

P: I train to fight. I work in dangerous places.

HP: He is always busy.

Again, Poirot discovers the true identity of the missionary. He also discovers the true reason for her aversion to alcohol. She’d had one too many drinks the night of the kidnapping, and she blames herself for not being alert enough to put a stop to it.

And again Poirot discovers the missionary played a part in the murder. He talks to her about what he should do with what he has learned.

Pilar: You said your role was to find justice.

Hercule Poirot: What is justice here?

P: Sometimes the law of man is not enough
HP: Where does conscience lie?

HP: May you find your peace with this. May we all.

As you can see by this interchange, the 2017 version wrestles a little more with moral and theological issues than the former, which we’re in support of here at Movie Churches. Our Steeple rating for both missionaries, Greta and Pilar, is the same: one steeple, our lowest rating. Murder does that to Steeple ratings. Part of the justice doled out for the crime.


*I would be remiss if I didn’t tell you that a church is mentioned in this portion of the film. While waiting to board the train in Istanbul, a British soldier tells Poirot, “The Church of Santa Sophia is magnificent!”

The soldier says, “No.”
Posted by churchandstates at 7:55 AM