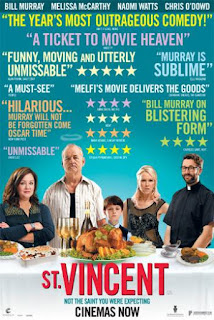 St. Vincent (2014)
There are certain words and concepts about which there is little agreement. For instance, “chili” in Texas is mainly beef and chili paste and flavorings. But there is also “chili” for vegetarians with a bean focus and peppers and onions and a lot of spice. And then there is Cincinnati “chili” which can consist of catsup and hotdogs on top of noodles and is an abomination against all that is right and holy.

“Saint” is another word subject to a variety of definitions. For Protestants, “saint” is a general term for Christians; Ephesians 4:12 in the King James Version talks about the “perfecting of the saints” referring to everyone in the Church. In the Catholic Church, on the other hand, a person isn’t called a saint unless they reach a special degree of holiness, which must be judged by special ecclesiastical judicial proceeding, canonization. The definition of “saint” in the movie St. Vincent is more, um, loose than either of these.

St. Vincent is the story of a boy named Oliver (Jaeden Lieberher) who moves to a new city with his mother (Melissa McCarthy) to begin a new life away from Oliver’s adulterous father. Oliver must enroll in a new parochial school, St. Patrick’s. On his first day of school, Oliver’s fellow students break into his locker and steal his bus money, phone, and house key. Apparently, no teacher and no priest in the school comes to Oliver’s aid. Since Oliver’s mother is at work, he must walk home in his gym clothes. Since he can’t get in, he knocks on his neighbor’s door. That neighbor is an old curmudgeon named Vincent (Bill Murray). 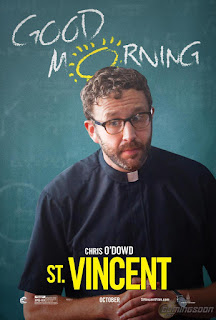 The school does a little better in religion class than they did in P.E. The class is run by a good natured priest, Brother Geraghty. (The priest is played by Chris O’Dowd, an atheist actor who has stated someday religion will be viewed as unacceptable and offensive as racism. But being a decent actor, no one would guess that view from his performance.) The priest introduces Oliver to the class and asks him to lead the morning prayer. Oliver objects that he can’t, “I think I’m Jewish.”

Brother Geraghty assures Oliver that’s fine. There are many religions represented in the class, “We have Buddhists, agnostics, a Baptist and an ‘I Don’t Know’ which may be the world’s fastest growing faith. We celebrate all religions in this class. Though Catholic is the best because we have the best rules and the best clothes.” 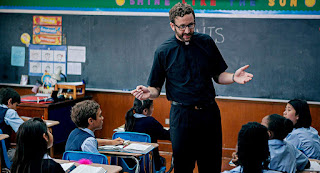 We see more of this religion class. The priest teaches a unit on saints. He asks for examples of saint and a kid mentions St. Jude. When asked what St. Jude did, the kid responses “He owns a hospital and runs a golf tournament.”

The priest doesn’t bother to correct him. Instead he defines a saint as someone who serves other people at great sacrifice. He makes no mention of God or holiness which is rather odd for a Catholic priests.

Brother Geraghty assigns the students the project of a report on a saint of their choice. 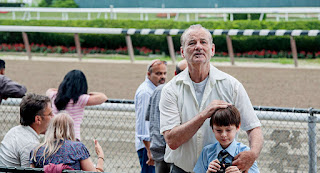 Meanwhile, Vincent cares for Oliver when his mother is working at the hospital. Vincent is an unconventional sitter, taking Oliver to a bar and the racetrack. Vincent also introduces Oliver to a Russian woman, Daka (Naomi Watts), as someone who works in the world’s oldest and “most honest” profession. Vincent also teaches Oliver how to fight dirty.

Oliver beats up Robert, one of the kids who stole his stuff, breaking Robert’s nose. Oliver’s mom is called to the school ot meet with the principal and Brother Geraghty. She says that the school doesn’t want to hear her troubles and the principal says, “We have loads of time.” She pours out her life story, including details of her husband’s affairs, and the men listen with incredible patience and compassion. For punishment, Robert and Oliver are assigned to clean bathrooms together and the boys become friends.

The students are to present their reports on saints in a “Saints Among Us Assembly” which is open to parents, friends, and apparently the general public. Oliver chooses as his saint his neighbor Vincent (as noted above, Brother Geraghty has a rather elastic definition of saints). Oliver says, “Saints never give up. Saints fight for themselves and others. Saints make sacrifices.  Saints are human beings, very human beings.” He introduces Vincent, acknowledging all of his vices.

I was debating how many steeples to give the clergy who run St. Patrick’s. The most disappointing moment is the lack of care Oliver receives that first day of school, but at the end of the film we see Oliver at a meal. He asks the blessing for the food and crosses himself (with some direction from Robert). Seems the priest must have done something right. So I’m giving them Three Steeples. Plus - for Groundhog's Day alone, Bill Murray deserves Sainthood.
Posted by churchandstates at 12:07 AM