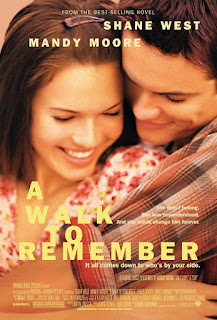 A Walk to Remember (2002)
In some ways, A Walk to Remember is an inverse version of Footloose. Instead of the boy teaching the girl to dance, the girl teaches the boy. Instead of the boy being the outsider who comes into town from the big city, the girl is the outsider who has always lived in the same small town where the story takes place. Though both films begin with high school hijinks going wrong, one film begins with death and the other ends in death. Both films, though, have a minister who is the father of a beautiful teen daughter, and in both films the minister is a judgmental and fearful man.

A Walk to Remember (based on the novel by Nicolas Sparks) begins with a group of rowdy teenagers getting into all kinds of shenanigans. But things get real when Landon (Shane West, Tom Sawyer from The League of Extraordinary Gentlemen), as a prank, pushes a friend into water from a great height, nearly killing him. This incident is discussed at the local church (like the town in Footloose, there seems to be only one church -- of no particular denomination -- in town. Landon squirms in his seat as Reverend Sullivan (Peter Coyote, who wore the spacesuit in E.T.) states from the pulpit, “Let us be thankful today that a life was saved by our Lord. And let us pray for the lives of the others involved who are clearly not on the path of righteousness.” The tone of the preaching is smug and condescending, and Landon doesn’t seem to be a fan.

Though there is no evidence to convict Landon of hurting his friend, he is caught drinking on school grounds and is punished by being forced to star in the school play. (This is a recurring device in movies and TV: drama as punishment. Maybe my experience was strange; I was in plays in high school by my own choice. And I wanted the lead roles. If I auditioned for a play and lost out on a role to, say, a lineman from the football team was being punished for punching a teacher, I would not be pleased. What makes all this even stranger is that because these actors in the movie are portraying acting as punishment.) Anyway, because he’s in the play, Landon must spend time with Jamie (pop singer Mandy Moore from Saved!), the minister’s daughter who wrote the music and lyrics for the songs on the play. (It seems to be a musical with only solos for Jamie, which is fine because there only seem to be about four or five people in the cast.) 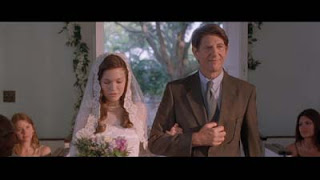 Jamie agrees to help Landon learn his lines if he promises not to fall in love with her. He agrees, but (spoiler) does eventually fall for Jamie. There are initial obstacles to their relationship, such as Landon mocking Jamie in front of his old friends. There also is the obstacle of Rev. Sullivan having a rule against his daughter dating (this may sound Old Fashioned but that’s another film altogether). Jamie’s father wasn’t even too thrilled about Landon coming over to the house to work on lines for the play. He is greeted by the Rev with these words, “Let’s get one thing straight, Mr. Carter. You think on Sundays I can’t see you where you’re sitting. But I see you.  I’ll be in my office just here.”

Landon goes to see Jamie’s father while the Reverend Sullivan is practicing his sermon from the pulpit. It’s an odd rehearsal for the sermon, because he just seems to be reading Scripture (Galatians 6:7:  “Do not be deceived: God cannot be mocked, A man reaps what he sows”) but he’s also taking notes, as if he’s marking what words to emphasize.

But Landon interrupts and asks the Reverend if he can take Jamie out on a date. “That’s not possible,” the minister replies.

Rev. Sullivan: “With all due respect, Mr. Carter, I have made my decision. You can exit the way you entered.”

Landon: “I’m just asking for the same thing you ask of everyone in the church. That’s faith.”

Though asking people to put their faith in God and putting faith in a particular person to do a particular thing are vastly different, this argument seems to win the Reverend over.

And so the romance of Landon and Jamie begins in earnest.

Jamie tells Landon she has lymphoma which is not responding to treatment. Landon eventually asks Jamie to marry him. They are married in her father’s church. Rev. Sullivan walks his daughter down the aisle and performs the ceremony. He reads from I Corinthians 13, the oft- quoted Love Chapter.

Jamie and Landon have a summer together, but then she dies. Landon goes to Rev. Sullivan and expresses sorrow about Jamie not getting her miracle (the miracle of healing). The Reverend assures him that Jamie got a miracle: Landon, her “angel.” This, one of the final scenes of the film, is the only time we see the Reverend treat Landon with any portion of compassion. It would have been nice if something besides his daughter’s death could have brought that out of him.

As for the Steeple ratings, the church seemed nice enough. The building was your standard white wooden country church with the steeple and stained glass. There was a nice, interracial choir that sang a nice song about Jesus as a Lighthouse. But because of the Rev. Sullivan’s difficulties reaching out to the lost, I’m only giving it Two Steeples.


(It probably should be noted I didn’t see the film as it was originally presented. I watched a DVD from the Fresno library with the film “formatted to fit your television.” It was also a “Family Edited Version” for protection from the swears found in this film, which was rated PG when it played in theaters.)
Posted by churchandstates at 8:37 AM