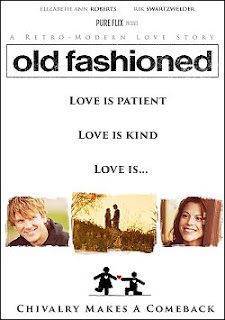 Old Fashioned (2014)
There was a mini-scandal in the last year when Vice President Mike Pence mentioned he chose not to dine or have drinks alone with a woman other than his wife. There was much consternation about the sexism of such an action, but I was sympathetic to his stance. During John McCain’s unsuccessful run for president, The New York Times ran a front page story suggesting he was having an affair with a female lobbyist when they were spied in a restaurant. It occurs to me that the headache could have been avoided if McCain had the Pence policy in place. Billy Graham famously made a policy of never being with a woman alone, other than a family member, throughout his ministry.

Reasonable arguments can be made for and against such a policy for a married person in the public eye, but I find it much more difficult to see the rationale for the policy the character Clay (Rik Swartzwelder) set for himself in the 2014 film Old Fashioned.

There has been a trend for the last twenty years in some church circles (since the 1997 publication of Joshua Harris’ book, I Kissed Dating Goodbye) to abandon “dating” in favor of an idealized idea of “courtship.” The main difference between the two practices is that in courtship, the time the couple spends together is chaperoned, usually by family. Clay shares these values. A single man in his thirties, he has decided he will never be in a room alone with a woman.

The characters call such a policy “old fashioned,” but I’m not sure when this was ever the social norm in western society. I recently read Charles Dickens’ Bleak House, and there are a number of scenes in that novel, set in the Victorian age, wherein the virtuous heroine, Esther, is alone with a man in a room. Biblically speaking, the Book of Ruth, a great romance, would not lead one to the policy that a man and a woman can’t ever be alone together outside of marriage.

Which is all swell. Viewers see flashbacks to his college days when as a frat boy he treated women horribly. As a result, he set up a policy for himself of never being alone with a woman aside from a family member. Many Muslims (and Orthodox Jews) live by an even more stringent set of standards.

The problem (or, in the romantic comedy setting of the film, “wacky misunderstandings”) begin when Clay rents a room to a young single woman, Amber (Elizabeth Roberts). His initial dealings with her all take place outside. But when Amber needs repairs for her apartment, a clogged sink for example, Clay makes Amber stand outside her own apartment while he works. On a chilly night when her furnace needs repairs, he sends her out with a blanket. With such self imposed limits, Clay should only rent to men.

Thankfully, it is never implied in the film that Clay’s standards for dealing with women are Biblical or taught by the church, merely that this how things used to be. 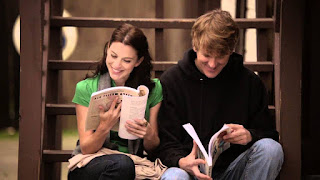 Because this is a romantic comedy, Clay and Amber eventually do begin to dat… I mean, “court.”  They go to Clay’s aunt’s house for dinner. Clay’s parents are deceased, but he has a close relationship with his aunt. She suggests where they should go for their next, um, courting experience.  “Why don’t you ask her to go to church?” his aunt says.

Clay is a Christian, but we learn from his aunt that he’s not a regular church goer. She tells Amber, “He quit going to church because people weren’t perfect like him.” It seems people in the church don’t live up to his standards of conduct. Amber isn’t a Christian, but agrees to go to with Clay to church. It’s an old fashioned looking structure, red brick with a white steeple.

We don’t see or hear much of the worship service, but we do hear a children’s choir singing endearingly but off-key. During the service, Clay and Amber hold hands.

Though we as viewers don’t get to hear the pastor of the church preach, we do see his office. Clay and Amber visit the pastor. He says, “I’m so glad to see a couple serious about pre-marital counseling.” They tell him, “We’re not getting married.”  Though he is puzzled, he gives them a premarital counseling book with questions for engaged couples to ask each other. Clay and Amber spend more time together in public, asking each other questions from the book supplied by the pastor.

Because this is a romantic comedy, Clay and Amber do face a number of misunderstandings, yet overcome their difficulties to theoretically live happily ever after. They may well get married in that red brick church and the wedding may be officiated by that unnamed pastor.

I do hope that they start to attending that church or another good Bible teaching church because God is better at coming up with rules for us to live by than most of us -- especially Clay -- can come up with for ourselves.

Though we don’t see much of the church in the film, I’m giving it three steeples in honor of the cute though offkey kids’ choir.

Posted by churchandstates at 12:18 AM