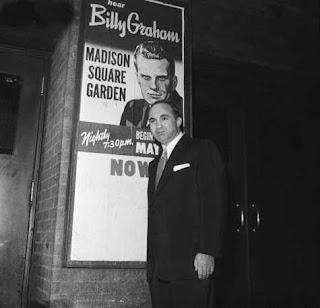 We’ll be posting here less frequently than we did in 2016, but don't worry! We'll still be posting regularly. Last year, you'd find a new post two or three times a week, mostly about films in the states we were visiting. There was a post about the going to the movies in each state, and another about films set and/or filmed in that state. Since we aren’t traveling now, you won't find those posts this year.

But as you probably remember, the original purpose of this blog was to examine how the Church and clergy are presented in films of the past and present. Those posts will continue on a weekly basis.

This month we’ll be looking at Mob Churches, or more precisely, Churches and the Mob.

A story has been repeated in sermons since the supposed incident happened (in 1949). During Billy Graham's first great Los Angeles crusade, the evangelist had extended conversations with the notorious gangster Mickey Cohen. When Graham challenged the mobster to change, Cohen has been quoted as saying, “You never told me I had to give up my career, you never told me that I had to give up my friends. There are Christian movie stars, Christian athletes, and Christian business men. So what’s the matter with being a Christian gangster?”

This month, we’ll be looking at films where characters must decide whether to be a Christian or a gangster. Perhaps there will be some characters who want to be both.
Posted by churchandstates at 4:23 PM