On the Oregon Big Screen 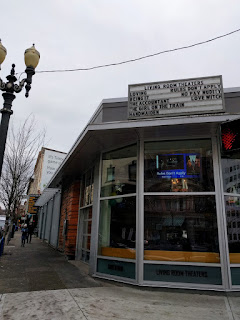 Many people have become disenchanted with the movie-going experience, and believe me, we get that. So many annoying things can be part of the modern film going experience -- from limited choices of only the lowest common denominator features to oblivious zombie employees to poorly projected films to endless commercials before features to loud and bright phones disrupting the film….so many things can make filmgoing unpleasant. (You know what I’m talking about, Regal Cinemas.) I understand why many people say, “I’d rather watch movies in the living room.”

When in Portland, Oregon, I totally agree. I’d rather watch anything in The Living Room. It’s an independent movie theater in the downtown, not far from such landmarks as Powell’s Bookstore and Voodoo Doughnut. The theater has a bit of a hipster air to it, but when you’re in Portland, that’s part of the local charm -- even the restroom signs have hipster portraits. 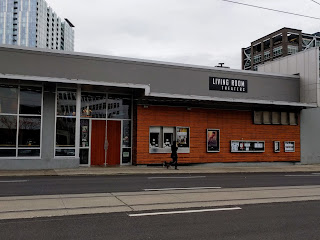 The exterior of the theater is pleasant, but doesn’t really say “movie theater.” Inside, there’s a nice little bar with a variety of food and adult beverage offerings. The popcorn comes in three sizes of white melamine bowls. Inside the theaters, there are tables and other spaces to rest the food and drinks.

The staff was friendly and helpful, even though someone was being trained on the register as we bought our tickets, stretching out the process. I was getting a little antsy because we were running late, but I was assured there were plenty of trailers before the feature. 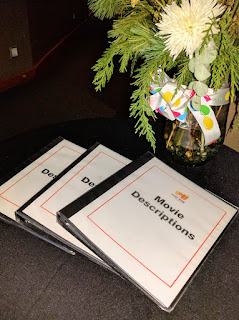 The theater offers a mix of popular and art films. Looking at the current offerings, I could see the animated kid’s film Sing along with a documentary about one of my favorite actors: Mifune: The Last Samurai, along with other features from Japan and Belgium.

We went to see the new docu drama from writer Jeff Nichols, Loving. The film tells the story of Richard and Mildred Loving, a white man and a black woman who married in Washington D.C. and returned to their home in Virginia, violating the state’s anti-miscegenation laws. Their case went to the Supreme Court, overturning all state laws against interracial marriage (in 1967, sixteen Southern states had such laws). 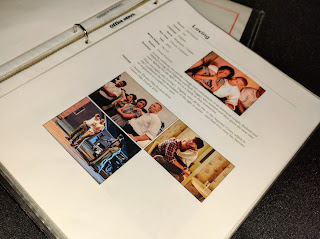 There aren’t any churches in the film, but most of the religious views expressed in the film are morally repugnant. The Virginia judge who made the initial ruling against the Lovings argued that God had placed races of people in different continents, obviously to keep the races apart. Not only do such arguments show great historical and scientific ignorance, but also great Biblical ignorance. Paul wrote (in Galatians 3:28) that in Christ there is no Jew or Greek, which seems to indicate we shouldn’t worry about such things as racial purity. But bogus Biblical arguments about separation of the races flourished in the Jim Crow years. 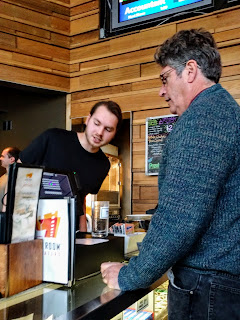 Even more sick were the arguments that the Lovings’ children were bastards, since the Lovings weren’t legally married. Name calling of little kids doesn’t seem like the best legal stance to me.

We never see the Lovings receive support from a church in the film. I don’t know whether that’s because no church publicly supported them, or because the film just didn’t depict it, but if churches didn’t give the couple support, that is very sad. I did notice that there was a Bible shown in the Loving home.

So the Living Room was our theater for our 49th state, and on Friday, we’ll write about our visit to a movie theater in our fiftieth and final state for the year.
Posted by churchandstates at 2:43 PM

Email ThisBlogThis!Share to TwitterShare to FacebookShare to Pinterest
Labels: Oregon