On the Big Screen in Idaho 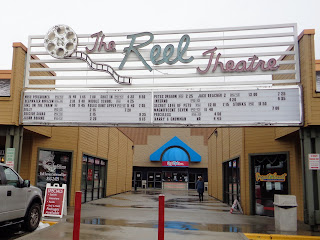 Obviously the best thing about discount theaters is, well, the discount. The Northgate Reel Theater in Boise, Idaho, charges only $3 for admission most days, and $1 on Tuesdays. But another good thing about discount theaters is they have the movies that have left the first run theaters. So if you think you’re not interested in a movie, but you eventually hear good things about it, and it’s already left all the first run houses… Well, there you go. 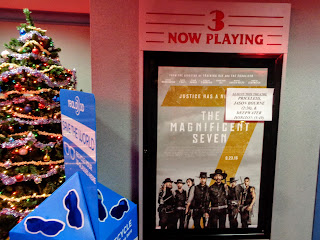 But we hadn’t heard good things from people about the film we saw.

We had low expectations for The Magnificent Seven. We heard it was no great shakes, being the remake of a remake. 1954’s Seven Samurai by Akira Kurosawa was a great film. It was remade as a Western by John Sturges in 1960, a very good film. It wasn’t surprising to hear that it didn’t compare to the other films, but no one told me that it had a Movie Church! The Church is rather central to the film, which is, of course, ideal for this site. 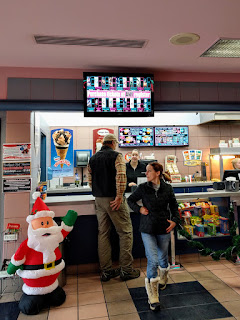 The film opens in a church. The citizens of a small Western town are discussing what to do about the evil mining baron, Bartholomew Bogue (Peter Sarsgaard) who is trying to drive them from their land. The pastor leading the meeting allows everyone to have a say. One good Christian man makes a bold statement about their need to trust in the Lord. The mining baron and his thugs enter, threaten the townspeople and shoot the man who said he would trust in God. The evil men then set the church on fire.

The widow of the good Christian man searches out gunmen tohelp the townspeople. For inexplicable reasons, she does so in low cut blouses (the other women in town have high necked prairie dresses, but her decolletage is never mentioned). She finds Sam Chisholm (Denzel Washington), a most dangerous man. When he asks her if she seeks revenge, she responds, “I seek righteousness, but I’ll take revenge.” As in previous incarnations of the story, the leader finds six companions. 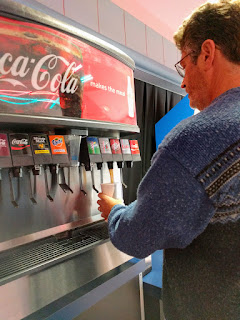 The church suffers more damage in the battle for the town, so I’ll add another steeple for a total of four steeples.
Posted by churchandstates at 11:21 AM