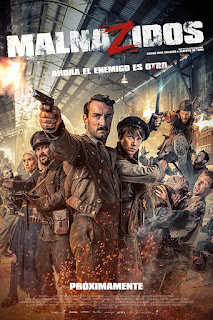 Today we have a bonus Zombie Movie Church because I wanted to give this film a break. It had a rough time.
Valley of the Dead (Malnazidos), a Spanish film, premiered on October 8, 2020, at the Sitges Film Festival. It was scheduled for a wide release in January 2021, but COVID-19 postponed its debut until September of 2021, then postponed its debut again to March 2022. This release, too, was canceled and the film never received a theatrical release. It went to streaming, including Netflix.

Valley of the Dead is set in 1938 during the Spanish Civil War, though it isn’t completely historically accurate -- such as the part where the Nazis experiment with biological warfare by turning people into zombies. (I don’t remember Stephen Ambrose or Cornelius Ryan ever mentioning the Nazis' zombies in any of their World War II books. Of course, they kept pretty quiet about the Nazi search for the Ark of the Covenant as well.)

Something I appreciated about the film is that characters on both sides of the War, the Republicans and Francoists, are portrayed sympathetically. In addition, both sides include rather evil characters, though the worst are the Franco supporters who collaborate with the Nazis.)

The film opens at a church (boding well for this blog) as bells ring in celebration of a wedding. All seems joyful until Nazi soldiers appear wearing gas masks. They machine-gun the wedding party and spread a strange gas. It seems all attendees of the wedding are killed (but, we learn later, the bride survived).

In Franco’s military headquarters we see a lawyer commissioned as Captain Jan Lozano (Miki Esparbe), and given a dangerous assignment to cross enemy lines. A young enlisted soldier, Decruz (Manel Llunell), is assigned as his driver. As they drive, Jan asks the young soldier why he joined Franco’s army.
Decruz rambles in what seems a pointless way, talking about the wonderful puff pastries made by the nuns of his small town, but then he explains he was afraid the Reds would capture or kill the nuns. 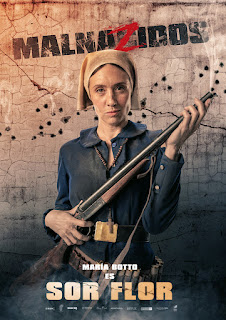 This seems rather extreme until the two are captured by Communist opposition soldiers. A woman soldier, Matacuras (Aura Garrido), is called “the Priest Killer” by her fellow soldiers. This nickname seems to be spoken with admiration. Eventually, she tells Jan about dealing with a priest in her small town who had abused her sister. Since then, her reputation as a killer of clergy has put her in good stead with her unit.

The Communist sergeant (Luis Callego) berates Jan and Decruz for “believing in nuns and priests.” Jan responds that nuns and priests do, in fact, exist. The Sargeant continues, “You believe God died and rose from the dead three days later in Bethlehem…”
Jan tells him, “That was Jerusalem, and it was Jesus, not God.” Here I think the Sergeant was correct on the more important point -- but enough Christology.

The entire company is soon attacked by zombies and the group must work together to fight them. Brodski (Segio Torrico), a Russian, recalls that in the Motherland, “They say the demon possessed come back from the dead.” Brodski also says, “My grandmother used to say, ‘When hell is full, the dead will walk the earth.’”
Which I though was just part of the Dawn of the Dead marketing campaign, but maybe it predates that.
Someone wonders about similarities between zombies and the Ressurection. Someone else responds, “When Jesus rose from the dead, he didn’t start f**** eating people.”

They seek shelter in a barn, where they encounter a nun and fighters from Franco’s army. They agree to an uneasy peace to battle the zombies. The nun, Sol Flor (Maria Botto), says “God guided our steps to here.” She treats the wounds of one of the Communist soldiers. When one of the men is killed by zombies, Sol says, “Though he is a Red, may God embrace him in His glory.”

As the battle with the zombies continues, Sol takes part. They find that the Nazis are hiding out in the church we saw at the beginning of the film, perhaps with a cure for the zombie plague. Sol is bitten by a zombie, meaning she will eventually turn into a zombie herself. She arms herself and says, “I am going back to the church. Someone needs to care for their poor souls. I have work to do.” She takes extra bullets which she calls her “consecrated hosts,” and gives her life to help others. (We apply our John 15: 13 rule here. Other things being equal, clergy giving up their lives for the sake of others earn our highest Movie Churches rating)

So we're giving Sister Sol Flor (along with those fine puff pastry-making nuns) a Four out of Four Church Steeple rating.

Posted by churchandstates at 10:04 PM