In Theaters (and Streaming) Now: The Many Saints of Newark 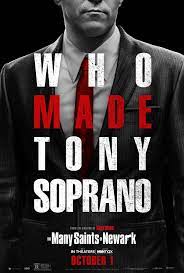 The Many Saints of Newark

In the HBO crime drama, The Sopranos, there was a priest named Father Phil (Paul Schulze) who was an interesting, but not very good, priest. He had an ongoing flirtation with Carmelo Soprano. That’s not a good idea for a priest with anyone in a congregation, but coming on to the wife of a vicious gangster… I can’t believe that would be endorsed in the worst of seminaries.

The Many Saints of Newark is a prequel to the TV series, following the formative years of Tony Soprano (with Michael Gandolfini, the son of series star James Gandolfini, as teenage Tony). But the real protagonist of the story is Tony’s uncle, Dick Moltistaniti (Alessandro Nimvola).

Toward the beginning of the film, Dick’s father, ‘Hollywood Dick’ (Ray Liotta), brings a young, beautiful bride back from Italy, Giuseppina (Michela De Rossi). Because our goal here is to look at clergy and churches in films, I’m happy to report we do see a priest in conversation with Hollywood Dick at Janice Soprano's First Communion party. Hollywood Dick's showing the priest a picture of his new bride in a bikini. It embarrasses the priest, just as most of the wise guys’ conversation at the party does. But we hear a couple of men gossip about how the priest was a bully in his school days.

New bride Giuseppina has some difficulty transitioning to life in America as the bride of an old man. A woman at a beauty shop asks her what she would have done if she stayed in Italy. She says people urged her to be a nun, but she would rather have been a priest because a priest is the capo (boss.)

My favorite spiritual moment in the film doesn’t feature a church or clergy, though. Gangster Dick Jr. is visiting his uncle, Salvatore (also played by Ray Liotta). Dick is visiting his uncle as a good deed, like his coaching a baseball team of blind children, and his care for his nephew Tony. It seems he does good deeds to make up for his, well, murdering people.

I loved what his uncle said to Dick. “You know that Christmas song, ‘My Favorite Things’? I think the things you do are not God’s favorite things.”

Posted by churchandstates at 8:43 PM