The Play's the Thing at Movie Churches Act One: (Because you want More...) 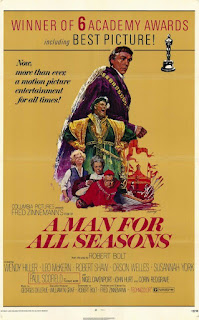 A Man for All Seasons (1966)
We're kicking off the year here at Movie Churches with a new theme: “The Play’s the Thing.” During January, we'll be looking at plays adapted to film (as always, they're films with clergy and/or churches). This week’s film, A Man For All Seasons barely qualifies though. It’s about a layman, Sir Thomas More, who was a politician during the time of Henry VIII of England. Even though he wasn't a clergyman, he had plenty to say about the church, and though he tried to avoid it, he gave his life for the Church. Eventually, the Roman Catholic Church made him a saint, so I guess that counts for something.

Robert Bolt’s first telling of More's story was in the form of a radio play in 1954. Then it was a teleplay for the BBC in 1957. It took to the stage at the Globe Theater in London and went on to Broadway, where it was a hit that ran for a year. It was adapted for the screen in 1966 and won the Academy Award for Best Picture along with an Oscar for Bolt, director Fred Zinnemann, and Best Actor for Paul Scofield for his performance of as Sir Thomas More.

In our first view of More in the film, he’s laughing as others mock the priests of the church (in England at the time, the Roman Catholic Church was the only church). A man jokes,  "Every second bastard is fathered by a priest.”

Another man makes a reference to More’s classic book, Utopia, “Why, in Utopia that couldn’t be.”

“Well, there the priests are very holy.”

Sir Thomas seems to find the whole conversation rather amusing.

More lived in a turbulent time. Martin Luther, John Calvin, and other reformers were leading movements to break from the Roman Catholic Church in various parts of Europe. More’s critical writings about the Church inspired some of these men, but ultimately, More remained faithful to the Catholic Church.

When a good young man, Matthew Roper, came to ask if he could marry More's  daughter, Alice, More refused. Roper was sympathetic to the Reformers. More, who liked Roper, still wouldn't allow his daughter to marry a “heretic.” The situation leads to family tension. 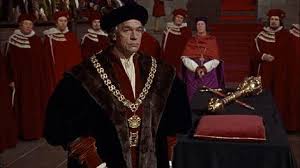 But it's nothing compared to the tension that begins when the King, Henry the VIII, wants to break from the Roman Catholic Church. The other Reformers had theological differences with the Church regarding faith, works, grace, and salvation. Henry’s disagreement was over whether he’d get his own way.

Henry had been given a special papal dispensation to marry his brother’s wife after his brother’s death. But that wife, Catherine of Aragon, gave Henry no sons, so Henry wanted to divorce Catherine to marry a younger woman, Anne Boleyn. The pope would not grant the divorce, so Henry decided that England would leave the Catholic Church. He would create a Church of England --  the Anglican Church.

Of course, Henry tried to put his decision in a holy light. He said he should never have been allowed to marry Catherine in the first place. God was punishing him for this sin by denying him an heir.  Since the king's was correcting his earlier error, anyone who opposed his course of action was opposing God as well. King Henry (Robert Shaw) says, “I have no queen! Catherine’s not my wife! No priest can make her so! They that say she is my wife are not only liars but traitors!”
At this turbulent time, More was the King's Chancellor. Naturally, all who served the king were expected to endorse and support the King’s policy, so More resigned from his position without saying anything against the king. More, a lawyer, argued that the law -- technically -- takes "silence" to mean consent. 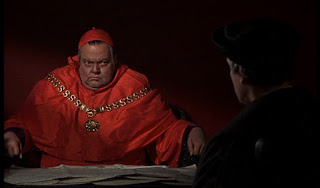 The people of England, though, know that More believes the king to be wrong in his decision to leave the Roman Catholic Church (and to marry Anne). Forces within the King’s administration, particularly Thomas Cromwell (Leo McKern) attempt to require More to choose between supporting the king in verbal or written form -- or being executed for treason.

More uses every trick and twist he can find in the law to keep himself alive. In the end, he refuses to violate his own conscience and stays true to the Church. And loses his head to the executioner.

I probably should admit why I included this film even though More isn’t a clergyman. This is one of my favorite plays and screenplays, and More is one of my heroes.

Come to think of it, there is one clergyman presented prominently in the film: Cardinal Wolsey, a slippery fox of a politician in a red church robe. People say he’s “a butcher’s son, still a butcher.” Like most of the clergy in England of the time, he is more than willing to sell his soul to the king and those in power when it is to his advantage to do so.

As More says of Richard Rich, a man who betrays him, “Why Richard, it profits a man nothing to give his soul for the whole world… but for Wales?”

The church in this film -- both the Roman Catholic and the Anglican -- doesn’t come off too well. I’ll give it a rating of Two Steeples. As for Sir Thomas More? I’m sure he wouldn’t care what I rated him.

When More tried to persuade Richard Rich to stay away from politics for his own good, he said, “Why not be a teacher? You’d be a fine teacher; perhaps a great one.”

Rich asked “If I was, who would know it?”

More replied, “You. Your pupils, your friends. God. Not a bad public, that.”
Posted by churchandstates at 9:03 PM