Why Review the Churches (and Clergy) in Movies? 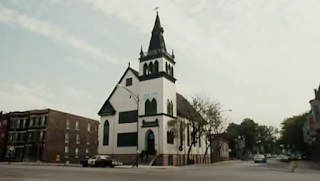 If you're a curious (or should I say inquisitive?) person, you may be asking the question in the post title.

In the Western world, it's pretty easy for a person to go through life without going to church  or meeting a person in the clergy (except for the occasional wedding or funeral). And yet churches, pastors, priest and nuns are still pretty common in the media. Sadly, movies usually do a fairly lousy job portraying churches. Not only are the portrayals often negative, they are even more frequently inaccurate.
It isn't necessarily a bad thing when churches are portrayed negatively. It isn't necessarily a bad thing when a member of the clergy is presented as a crook or a fool or a pervert; because there are bad churches and some members of the clergy are pretty awful.
But often these negative portrayals are created by people who seem to have no idea what they're talking about. They get all the details wrong, leading to getting the big picture wrong. And if all the churches and clergy are shown in a negative light, the movies aren't accurately presenting the real world. Because though Richard Dawkins might not agree, there are some really good churches and really cool clergy out there. I've seen it for myself.
If you're a part of a church and want to introduce people to the real church, you might find it useful to deal with the expectations people have from seeing Bing Crosby's crooning priest or Robert Mitchum's homicidal preacher or even Whoopi Goldberg's phony nun. And if you're someone who doesn't go to church; you might be interested in learning when movies got it right and when they got it wrong.
In another blog (DeanandMindyGotoChurch.blogspot.com) we'll continue to visit churches in the real world: but here we'll go to fake ones. Because the churches in movies work in the imaginations, hearts and minds of people who need the real God who is worshipped in the real churches.
Posted by churchandstates at 7:19 PM